Perry's Apothegms
I verbalize my guiding light in Perry's Apothegm no.1:"Carpe Diem". This then to me is the gestalt of success: doing what you must; with the resources that you have; then seizing the moment! You can find me at: livingyourgreatestself.blogspot.com or in my Facebook site: Perry Auxillos as well as in my 3 Facebook Pages: Speed Computer College; Speed Center for Leadership; and Dive Sorsogon; I established the: Speed Center for Leadership; Dive Sorsogon; and Speed Computer College. I am CEO of Speed Computer College; I served as President of SAPTVI (Sorsogon Association of Private Technical Institutions), a group of private tertiary educators in the province of Sorsogon, Philippines, from 2006 to 2016; I hold CMAS Dive Certifications as Rescue Diver; Divemaster; and Dive Instructor. You can reach me at: p_auxillos@yahoo.com 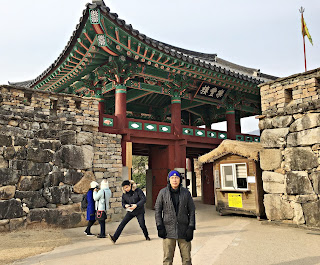 The man behind me is not a photo bomber. He is my tour guide in a 10-cities itinerary that took me from the north in Incheon where I landed; to a point south lower than Busan where I had been 6 months before; and back again to the north of the Korean peninsula to Seoul City, where I took my flight back to the Philippines. Incheon City, Gongju City, Daejeon City, Jeonju City, Jinan City, Boseong City, Suncheon City, Gwangju City, Yongin City, Seoul City.

Wan Ho Jo is an amiable guy, about 5’ 11” tall, and a bit lanky for his height. Wearing eyeglasses all the time, he looks more like an academician. He says he is 30 years old going by the international calendar system, having been born on December 5. But he is 32 years old if you go by the Korean calendar, because Koreans are considered 1 year old at birth; and then by year's end, 1 year is again added. So in his case, from December 5 to 31, or after 25 days, another year is added, making him 32 years old.

When he introduced himself, he said his friends called him Wan-no, which I guess was some sort of a nickname, and so I had called him that ever since. Wan-no learned English in middle school. I understood Koreans to have a 12-year system of education prior to university. But he said Korean kids now learn English in as early as elementary school. He is proficient in his spoken English, but he pronounces some words with effort. I learned later that Koreans have a phonetic system very similar to the Philippine phonetic system, except that they have 10 vowels and 14 consonants. And the first 5 of these vowels, believe it or not, are: ah- eh-ee-oh-ou. In any case, the rule-of-thumb he gave me is to write the spoken words as I hear them – simple.

Tour guides of today have a very potent tool in Google. Whenever Wan-no sees that I don’t catch up easily with what he is talking about, he simply clicks and returns to me a Google search data from his iPhone. By the way, considering that this is Korea, the originator of the widely popular android Samsung, I noticed that a lot of younger Koreans are using iPhones. I asked him why, and Wan-no’s answer was a simple “I like Apple”, but that he thinks the older generation still preferred Samsung.

The one thing that struck me about Wan-no was his graciousness and warm courtesy. One night after dinner, as we were walking back to our Kiwajib – the traditional clay roof house where we were billeted – I had made the observation that South Korea’s first tourists are the South Koreans themselves. I had observed that, on my last visit to this place 6 months ago, many young Korean parents brought their kids to the same tourist spots I visited. They love their culture and are the first educators of this culture to their children. This is probably the reason Koreans have such a rich 6000-year recorded history and tradition. In response, Wan-no made a quiet bow and offered his ‘thank you’ profusely.

Wan-no is indeed proud of Korean tradition and history. He will explain the site we are about to visit, or the food we are about to eat. He chose our meals carefully, making sure that we get a taste, not only of the standard Korean food, but also of the local food that each of the 10 cities I went to had to offer. For example, I learned that there are several kinds of Kimchi, which are fermented from cucumber, raddish, and several types of cabbage. And although I had eaten Korean barbeque before, I learned that Samgyeopsal, which is barbequed pork belly, literally means 3 layers. You will observe that the raw belly-part meat, before you put it in the hot plate, will have 3 layers of meat separated by thin slivers of fat. This differentiates it from either Moksal, which is meat from neck-part, or Galbi, which is rib-part. Although Wan-no will barbeque meat to well-done, he thinks it is best to do it medium-well. Wan-no checks out all your barbequed meat and will scrape all black residue on the meat surface if your meat gets overly roasted. He will do this extra effort because his father taught him his may cause cancer.

We took all our meals in Korean restaurants. Sometimes we used conventional chairs and tables, at other times we sat on the floor using traditional Korean table. Since it was winter, many of these places remained cold inside despite the huge heaters that they have. The only exception would be the floor, which would invariably be warm. Wan-no pointed out that Korea is basically a sitting culture – they would sit on the floor for eating or talking with family. This is why they use efficient floor heating systems. My Kiwajib, the traditional clay-roof house where I stayed, had no beds, yet the floor had to be warmed purposely because it served as the bed. Even modern buildings like Wan-no’s 6th floor apartment, have heated floors.

Wan-no is not overly religious, but he had such respect for the way he explained religion. He said that Koreans are 8% Catholics; 18% Christians; 14% Buddhists; and 50% no-religion. He took the effort to wait patiently outside as we prayed inside the Jeondong Catholic Church in Jeonju City; or as we sat on the floor of the Buddha inside Tapsa Temple in Jinan City, in a visit to its mysterious stone pagodas, at minus 9 degrees.

When I asked him about the towns we passed as we took long drives in-between cities, Wan-no said there were no exact translations for some English words such as localities smaller than cities. So in Korea, addresses are denoted by the Si–Gu–Tong system. For example, he resides in: Seoul Si, Mapo Gu, Songsan Tong. That’s the city of Seoul, Mapo district, Songsan locality, roughly speaking.

Wan-no also said some translations are bad. One extremely cold morning, I had an early breakfast at the 18th floor of Lotte Hotel, Daejeon City, which is one of the most prestigious hotel and department store chains in Korea. It has an imposing 360-degree view of Gap Cheon Stream, and the awesome bridges that crisscrossed it. I ate, believe it or not, ‘lugaw’ called “Person Who Lives in Poverty Porridge” in the midst of this majestic and grandest of views. This ‘lugaw’ is actually Maesaengi Juk rice porridge. It is thick and greenish in color, and has a distinct crab meat taste. The main ingredient is seaweed, for which Korea is popular.

On the last evening of my itinerary, Wan-no intimated that it is his wedding anniversary, and his wife is expecting to deliver their first child soon. I congratulated him and bade him goodbye as we shook hands. Back on my hotel lobby, I reflected on what makes this and my other travels fulfilling. It is not only the visual delight of viewing spectacular sights, but the opportunity of learning how other peoples live. There is so much to admire in one another’s culture and traditions. But many of them are universal and as relevant today as they were a millennium ago: respect; courtesy; graciousness; being considerate of others; respect for the environment; honesty; happy disposition in one’s work; humor; and humility.

Posted by Perry's Apothegms at 8:44 AM 0 comments